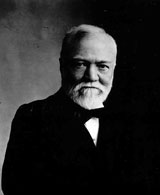 Andrew Carnegie was born in Scotland in 1835 and his parents moved the family to the United States when Carnegie was 12 years old.

At the age of ten Carnegie began working in a cotton mill. Later, he worked as a messenger boy for a telegraph company. Carnegie’s wages were $1.25 per week. By the age of 13 Carnegie learned to run a steam engine and his wages increased to $1.80 per week. When asked of his early schooling he replied, “None, except such as I gave myself”.

A gentleman once advised young Carnegie to lend out books to working boys from his 400 volume library. Carnegie remarked, “I doubt if ever so few books were put to better use.” From this kind gesture was born the idea to allocate millions of dollars to found libraries.

Carnegie was very thrifty and at an early age he invested in a new venture, that of the sleeping car. Carnegie explained the importance of laying aside money from one’s earnings as a young man. He described a future millionaire as one whose revenues exceeds his expenditures.

From the profits he received from oil wells, Carnegie founded a company for the construction of bridges and that led to the founding his steel industry.

Later Carnegie was able to combine several steel companies into U.S Steel, one of the world’s largest corporations. Carnegie is known for his charitable work throughout his life but he is especially known for the libraries he helped establish throughout the United States.

Carnegie died on August 11, 1919 in Lenox, Massachusetts. He had given away over 350 million dollars (over 4 billion dollars by today’s standards). He was buried at Sleepy Hollow Cemetery in North Tarrytown, New York. The Carnegie Foundation is located in New York City and is dedicated to keeping alive the Carnegie legacy.